The origins of tai-chi chuan are highly contentious with numerous different accounts, most of which appear to rely on anecdotal or circumstantial evidence. Tracing the history of Chinese martial arts is hampered by a low rate of literacy among past masters and the population as a whole. It is important to note therefore that few Chinese martial arts can trace their particular style back more than a few hundred years yet all are based on techniques and strategies that have evolved over considerably longer periods of time. Legend has it that tai chi originated on Wudang Shan, a sacred mountain in China, with a man called Zhang San Feng. Although it is accepted that Chang San Feng existed, there is much debate about how tai chi developed after him and even whetherhe is its legitimate creator.

Zhang Sanfeng (Chang San-feng) was a Daoist priest born in China during the 14th century C.E. Differing legends surround him, but there are few generally accepted historical facts. Many believe him to be the creator of taijiquan (Tai chi chuan), "internal martial arts" (the spiritual, mental and qi-related aspects which form the foundation of Taijiquan).

According to historical records, emperors of the Ming Dynasty heard of his reputation (most likely as a martial artist) and in 1391, and then from 1407 to 1419, sent out search teams to find him, but without success. From that time to the present, he has become a mythical hero, an archetypal Daoist immortal, a monk-warrior-martial artist gifted with extraordinary magical powers.

Master Zhang and the Creation of Taijiquan (Tai chi) Zhang Sanfeng´s fame was established after ten years of studying Buddhism and "external"-"hard style" martial arts at the Shaolin Monastery. Zhang then became a wandering hermit. He finally settled, among other Daoists, in the Wudand Mountain.

Here is one of the stories of how Zhang Sanfeng discovered Taijiquan (Tai chi).One day he spotted a snake and a crane in deadly combat. Chang [Zhang Sanfeng] noticed before the snake attacked, it would raise its head, bow its body, and appear to gather its intrinsic energy, ready to strike out like an arrow. In response, the crane would deflect the attack effortlessly with a downward arc of its powerful wing. From this, Chang developed an entire program of motions and responses. The crane would retaliate by stabbing its beak down at its prey. The snake used its flexibility to sway or dodge the strike, as in "roll back"; this allowed the snake to lash out at the crane's legs, but the crane would simply raise the vulnerable limb in a relaxed fashion so that the snake's bite could not attach itself, thanks to the "emptiness" of the bird's extremity. This natural display of yin and yang from the animal kingdom made a great impression, providing him with the realization that yielding is more effective than using brute force. Chang San-Feng still incorporated many of the martial postures he had learned from the Shaolin Monastery, but he tempered them with his own variations and innovations

Another legend tells that One day while sleeping Zhang Sanfeng was a deity - Emperor Huang Y, and gave him the teachings of the art of unarmed combat, based on which, subsequently, the system Dao Tai Chi Chuan was developed. It is based on the principle of not building muscle and brute force there, and the cultivation of the "inner" qi energy.

Mastering the Tao Nature Within on Wudang Mountain China

China´s Wudang mountains have been shrouded in mysticism for thousands of years. Located in central China´s Hubei province this sacred place has long been known for its traditional Taoist culture. Many people in the history of China, including some emperors, sought out secrets in Taoist alchemy on Wudang, hoping to discover and achieve the ever-elusive realm of immortality. 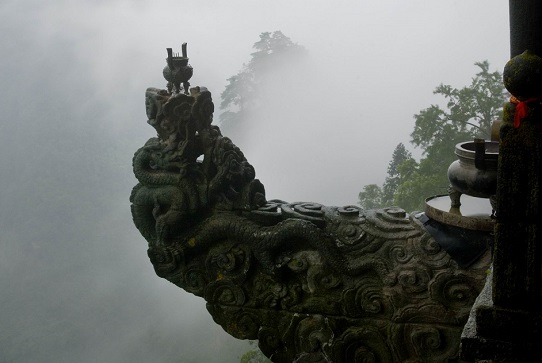 These days people don’t go to Wudang under the guise of finding immortality. Rather they go to discover knowledge and practices that will improve their health, to see the ancient architectural complex still in existence, be awe-inspired by the towering cliff temples, spend time at limpid waterfalls and experience first hand how Wudang Mountain blends in with nature harmoniously.

Originally called the Taihe Mountain it was renamed Wudang Mountain in the Song Dynasty some 1000 years ago. In 1994, the Ancient Building Complex on the mountain was included on the World Heritage List by UNESCO. It represents the highest standards of Chinese art and architecture over a period of nearly 1,000 years. Noted temples include the Golden Hall, Nanyan Temple and the Purple Cloud Temple.

Construction of the Ancient Building Complex started in the Tang Dynasty (618-907). During the reign of Emperor Taizong, the Five Dragon Ancestral Temple was built on Wudang Mountain. In the Ming Dynasty (1368-1644), about 33 palaces and structures including the Yuxu Palace, the Grand Purple Cloud Palace, the Yuzhen Palace and the Palace of Harmony were built. Then the grand and magnificent building complex was formed. At present, the extant building complex includes the Palace of Harmony, the Grand Purple Cloud Palace, the South Cliff Palace, the Yuzhen Palace, relics of the Yuxu Palace and the Five Dragon Ancestral Temple, Xuanyue Gate (a huge archway) and the Fuzhen Temple. 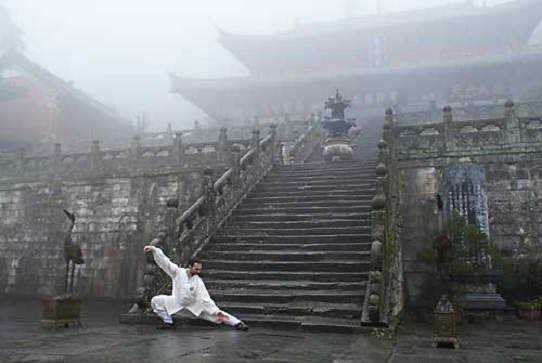 Wudang Mountain martial arts, noted for its exercise of the internal organs, meditation and breathing techniques, developed along with Wudang Mountain Taoism. Taoist priests have always put equal emphasis on spiritual practice and the promotion of the health. They derived the principles of for martial arts from Taoist theories and applied Taoist practical approaches to martial skills, thus gradually developing Wudang Mountain Kung Fu, which integrates ancient Chinese philosophy with extraordinary martial skills.

In the Ming Dynasty, Wudang Mountain Kung Fu reached its height through the outstanding efforts of a Taoist priest named Zhang Sanfeng, and gradually became one of the major schools of Chinese martial arts. If you have trained martial arts you might remember seeing in movies the depiction of wudang martial arts versus Shaolin martial arts. Where the Wudang arts are based in Taoism, its counterpart Shaolin was predominately Buddhist in practice. While this tension between the Chinese areas and schools makes for entertaining movies there is little if any factual information to declare the depiction true. If you have seen the classic fabled martial arts movies Crouching Tiger, Hidden Dragon and the new rendition of The Karate Kid with Jackie Chan, then in the filming you will see some temples and landscapes of mysterious Wudang Mountains.

The Hall of Yuzhen is the cradle of Wudang Kung Fu. In 1417, Ming Dynasty Emperor Zhudi decreed Wudang to be the "Grand Mountain" and ordered the construction of the Hall of Yuzhen for Master Zhang Sanfeng. On January 19, 2003, Wudang Mountain´s 600-year-old Yuzhengong Palace was accidentally burned down by an employee of a martial arts school. A fire broke out in the hall, reducing the three rooms that covered 200 square metres to ashes. A gold-plated statue of Master Zhang Sanfeng, which was usually housed in Yuzhengong, was moved to another building just before the fire and so escaped destruction. 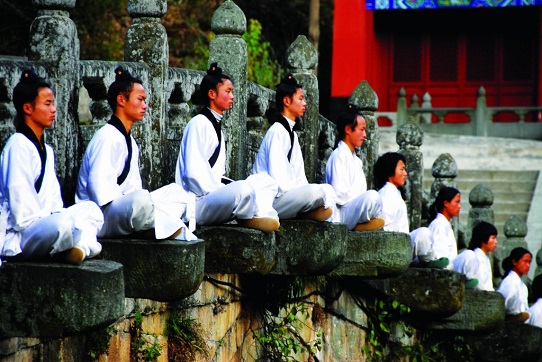 With pleasant weather of neither too cold in Winter or hot in Summer, Wudang Mountain is suitable for any time visit, especially in spring and autumn.